After an impressive streak of 9 consecutive league titles and a few managerial changes, Massimiliano Allegri was brought back to Turin by Andrea Agnelli, chairman of Juventus F.C, to restore the glory of the previous seasons.

Under the Tuscan manager, who should know the club's expectations well, Juventus are struggling more than ever, and questions started to arise regarding his appointment and, more in general, the board's decision making.

At nearly half of the 21/22 campaign, The Bianconeri are 7th in the league and eights points behind a top-four spot. A Champions League qualification placement seems further than ever. Is the chase over yet?

I tried to answer this question by analysing the data of past performances and comparing Juventus' performance with the top-four teams: Inter Milan, AC Milan, Atalanta and Napoli.

The data showed some interesting insights and highlighted a new angle: Juventus are actually succeeding and perfectly on track with their plan.

I used the xG-xGA comparison chart that I developed and explained in detail in one of my previous posts. In particular, this sort of diagram plots:

I plotted the above charts to compare Juventus' performance against each top-four team.

With only one loss in the entire season and five consecutive wins, Inter Milan are on a relentless run.

By looking at xG and xGA mean values, it's clear that Inter and Juventus concede almost the same amount of xGA, there's only a 0.15 difference. However, the Nerazzurri created much more offensively for their xG is, on average, 0.67 higher (Inter's 2.16 against Juventus' 1.49).

On only a handful of occasions, Simone Inzaghi's players conceded more than what they created in terms of xG. They haven't won any of these games. Weirdly enough, the last time Inter showed a low xG-xGA difference, was against Juventus.

The Bianconeri created more (higher xG), but they didn't win.

AC Milan started stronger than ever, becoming one of the main contenders of the title since the beginning of the campaign. Only recently, starting on the occasion of The Milan Derby, they began to stutter with only two wins in the past six games.

Despite The Rossoneri don't have a smashing offensive power like Inter do, they've been incredibly consistent so far, especially in terms of results. Their mean xG figure is only 1.7 better than Juventus, but thanks to their clinical decision making in front of the goal, AC Milan bagged 13 more goals and are 11 points ahead of the Bianconeri.

Except for a few outliers, their limited xG-xGA difference shows their organisation and solidity.

The Rossoneri have never won whenever they've registered a negative xG-xGA difference, meaning that performance-wise they conceded more than what they created. This happened on three occasions: in the last game against Udinese (xG-xGA difference of -0.7), in the Milan Derby (-1.7) and against Juventus where the Bianconeri had a better xG by 0.3.

Once again, The Bianconeri outscored the opponent in terms of performance, but they didn't win.

With six consecutive wins and ten successive useful results, Atalanta are probably the team with the best form. The last time they lost a game was against Milan more than two months ago.

Their xG has almost always been well beyond zero and slightly larger than Juventus's. On the other hand, their xGA output is worse than the Bianconeri's, but with 37 goals scored so far, the second-highest measure, this hasn't been a problem so far. Atalanta are just so good offensively that, even when they concede, they outscore their opponent.

By considering the xG-xGA difference, it's clear that when such difference is negative, meaning that xGA is considerably greater than xG, Atalanta have always lost except on one occasion.

"La Dea" faced Inter Milan and AC Milan back to back across gameweek 6-7. In both games, the xG difference was negative and roughly around -1. More recently, Atalanta faced Udinese and Lazio, where they registered a slightly negative xG and didn't win either. The only time where Atalanta registered a considerable negative xG-xGA difference and still managed to win the game was against Juventus.

I'm not even surprised at this point. Again, another example of Juventus registering a better performance and failing to claim the three points.

Under the new manager, Luciano Spalletti, Napoli started with a bang, winning eight games in a row and collecting 31 points in the first 11 games. For comparison, Juventus have amassed 23 in 17 games.

After the game against Bologna, where the Parthenopeans registered the highest xG figure so far, their form started to dip. Before that game, Napoli's xG was high and around 2.0, whereas, recently, it's been around 1.0, which is a considerable drop. This is reasonable considering the initial impressive run and their short bench. Not to mention Victor Osimhen's injury.

Still, on average, Napoli are the only team able to create more than Juventus and also concede less. None of the squads above have a better xGA than Juventus except Napoli for which both xG and xGA metrics are better than the Bianconeri.

In the current season, under the new-not-so-new manager, the game against Napoli was Juve lowest point in terms of negative xG-xGA difference jointly with the season-opening match against Udinese.

Comparing Juventus's performance against the top four clubs showed a couple of key insights. In particular:

Max Allegri was praised by Agnelli for his pragmatism and the theorisation of the "Corto Muso" (literally "Short Muzzle") way of thinking, which is a term used to describe winning by a nose.

Unsurprisingly, the data shows that Juventus are succeeding in what they are after, that is trying to win by a very narrow margin. The Bianconeri sit deep, exacerbating the opponent's offensive fluency, try to hit on the break for the 1-0 lead, and then defend until the end of the game.

The Bianconeri are succeeding, but they are solving the wrong problem. If you aim at winning 1-0 every game, you are going to draw a lot of games, without creating any solid momentum. On top of that, the urgency is given to the imminent present without thinking beyond the next result.

One of the many mottos used to express Juventus' philosophy is:

Winning is not important, it's the only thing that matters.

This used to represent their never-ending desire of winning but this result-minded approach seems more a curse than a blessing now.

Football clubs and tech companies sometimes face similar problems trying to succeed through failures while learning and adapting.
Ultimately, Juve's success at solving a flawed plan is perfectly summarised by Eric Ries's quote, taken from his book entitled "The Lean Startup", regarding customer needs and how companies can be successful or not whether they're able to respond to those needs or not:

“They had “achieved failure” - successfully, faithfully, and rigorously executing a plan that turned out to have been utterly flawed.”

The Bianconeri still have time to turn the season around, but the path ahead doesn't look bright. If they failed to qualify for the next Champions League, prioritising short-term goals without investing for a sustainable future, would their season be considered a success?

This tutorial explains how to create a Rugby Union pitch in R using ggplot.

I created a squad profile for Serie A teams to understand the distribution of young talents and accomplished players across each position. 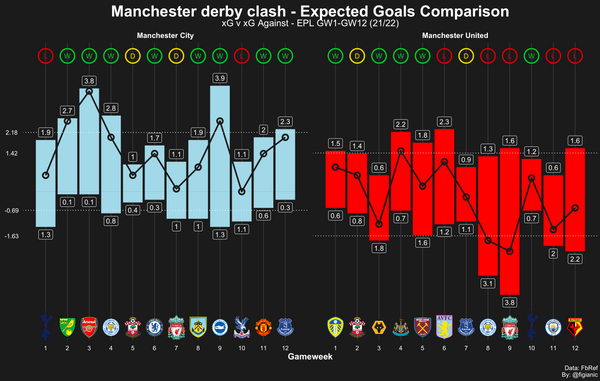 In this tutorial, I'm going to show you how to create a chart to compare xG and xGA metrics across multiple gameweeks for one or more football teams.